Are you concerned about the security of your home? Trust our local lockout locksmith contractors

What's Wrong with My Keys and Locks?

We have seen it happening over and over again. We are trying to put the key in the lock, but it doesn't fit. We try again, using some force and eventually the key may break or completely disappoint us. Much later we will discover that we were using the wrong keys and the keys of our door locks were in the other pocket, but now it's too late as we are faced with a set of broken office keys and we know that we'll never make it on time for our next appointment.

This experience is not only obnoxious, but it could also be dangerous if we would break our ignition car key because we put too much power or took our wife's instead. It will cost us in money and may be endanger our lives, if we are dealing with kids locked in cars or sick people locked in houses. On the other hand, keys don't break only because they are the wrong ones for a specific lock, but because they get old, too.

Do you want to know what's wrong?

We rarely remember it, but keys get old, too. Locks get rusty. Eventually, they will make a very bad pair that will be completely useless for our protection. Consider the following:


• If you wash your keys or keep many of them in a drawer for far too many years, they will definitely rust.
• Keys are metallic little things that will eventually wear down due to old age or even too much dirt.
• They can get distorted, especially if you don't take care of them or placed them close to fire.
• Locks get distorted, too, and need some lubrication.

For all the above reasons Locksmith Solana Beach would suggest frequent lock change and key replacement. There is nothing worse than not being able to enter into your house or destroying the car keys. The consequences could be terrible and this is a pity in a world full of excellent options. So, have your keys and locks replaced! 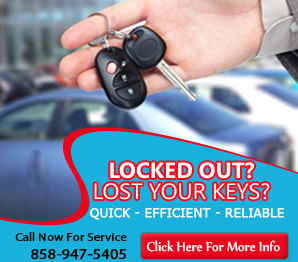 Our company services in Solana Beach